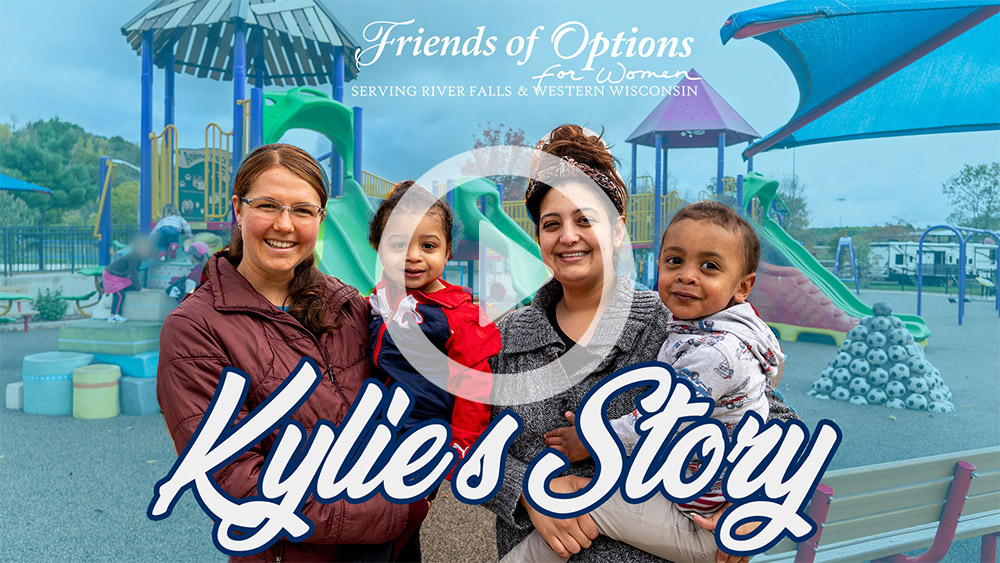 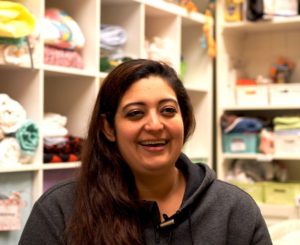 Hi, my name is Kylie and I’m 26, I’m a mother of three babies with another one on the way.

About 2 years ago while struggling with my faith and parenting my kids, I was feeling overwhelmed, with no one to turn to, no resources and no one to help.  So I searched for support on google and that is where I found Options for Women and I found Marie!

When I found out I was pregnant with my fourth child, I was not excited to say the least.  I found myself crying after my 10th test confirmed that I was indeed pregnant.

Working 70 hr a week shifts, having three kids and balancing life is not easy.  I found myself in a deep dark place asking, “what am I going to do?”  And while I don’t believe in abortion, I considered it.

In addition to these struggles my partner and I were not on the same page about this baby, but ultimately I decided to give this baby a chance at life. If I hadn’t had the support of Options for Women and my close relationship with Marie, I probably would have got an abortion and would be telling a very different story.

Options gave me the chance to hear my baby’s heart beat and a chance to love this unborn child.  The resources they have available, diapers, clothes, baby food, bottles, and anything else I needed have helped me choose life for my unborn baby.

I’ve taken some time to tune everybody out and figure out where it is that God wants me to be, and it’s not abortion.   Options for Women has changed my life, and I’m so grateful that I called Marie and for all the support I’ve received! 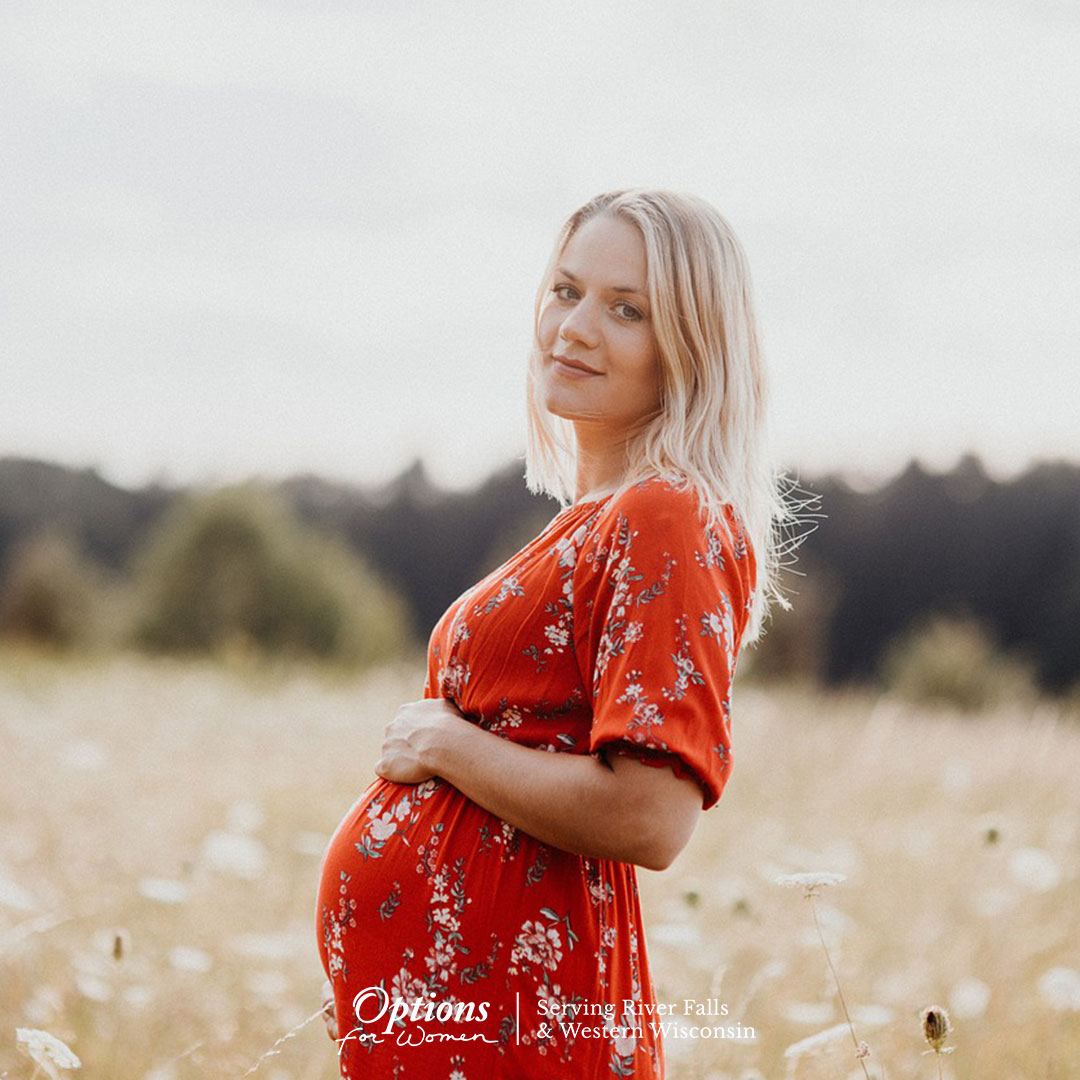 I would like to say that Options has been my best friend since before the birth of my son. They have been there for me in my life when I needed them the most and I didn’t even know it. Options for Women is for everyone, even when you don’t realize it.

Options for Women is so much more than just what it seems. I came in to learn about their amazing FEMM program but left with the best support system ever. Everyone knows you on a first-name basis and actually cares about what’s going on in your life. They have been there when I hit bottom as well as to celebrate all the little wins! They are those friends everyone wishes they had.

They are tremendously kind and wonderful people who I looked forward to meeting with every week. They helped me to find insurance that worked for me, and provided a much-needed pillar of support in what was often a stressful time. The affection and even love that they extended to us time and again did not stop when Solomon was born. The people who work there put themselves on the line because they genuinely care about mothers and children, which is why they were there every step of the way.

With the staff at Options for Women, I knew I was safe to ask questions about being a mother to people who had been there before and who knew how to help. I would recommend Options for Women without reservation to anyone who has questions or doubts about motherhood or reproductive health.

*Most names have been changed to protect the identity of our clients.

“Have you seen the booth next to yours? Are they like Planned Parenthood?” my friend asked. I stood up from my company’s table that was set up at the county fair and peeked over the short wall separating the booths. A huge banner with a logo reading “Options for Women” hung above some people tending to brochures on the table.  “No idea. Never heard of them.”

A few weeks later, I was waiting in dread to go to the grocery store and buy a cheap pregnancy test after a one night stand. In the meantime, I Googled ways to get tested for an STD.  None of it was my first time. In college I abandoned my “goody-two-shoes” life founded on Jesus. I was the girl who was going to wait until marriage for her first kiss, but I burned rubber toward rebellion.

My routine: Find scanty clothes, make up my face, down 3-5 shots of whiskey before heading out to the bars. Two more drinks later, make eye contact with the best-looking guy in the place. Order an Uber with him to my house so I don’t feel lonely when the alcohol wears off. I started to lose count how many times I followed this schedule. These drunk nights led to mornings filled with Plan B pills. Days after, I was clouded with anxiety and Googling “can you still get pregnant after taking Plan B”. I would sneak a box of pregnancy tests in my grocery basket and pee on the sticks at a gas station before going back to my college house. Girls I knew in college kept pregnancy tests in their purses like tampons. “I have one if you need one,” a roommate told me one evening while I was studying abroad.  Another roommate, a French girl, told me she’d help me get to a French clinic for an abortion if necessary. She had done it before.

My Christian parents never had a thorough “sex talk” with me. They still rolled their eyes, muted the TV and fast-forwarded the slightest sexual scenes in films when I was around. I never saw them genuinely kiss or flirt in front of me. Sex was never on their agenda, so I assumed it should never be on mine. My guilt-ridden mind thought they would disown me if I confessed and asked for help after any of my reckless sexual encounters.

“Options for Women River Falls” popped up online for me when I was Googling after the county fair. It dawned on me that they had the booth next to mine that one day.  Free & confidential testing? Now I finally knew what they were about. A few days later, I was sitting across from Marie in a closed room. I had given a urine sample and was filling out paperwork. She asked me questions about my history. I stuttered embarrassingly through a few answers at first, but then found myself crying through some others.

In what seemed like a quick blur, I began to build a relationship with this lady who I initially thought was just going to test for chlamydia and gonorrhea and then tell me to use a condom next time. But she insisted, “No, come back whenever! We have an open-door policy. No appointment needed.” Through my tears, Marie’s reassuring and nonjudgmental words were sunshine in my storm. I finally saw a chance at a new life.  Marie has been a source of sunshine since then. She’s delved into deep conversations with me about relationships, self-worth and even pornography. She’s encouraged me, challenged me and laughed away doubts with me.

After my experience, I think one would be hard-pressed to find a woman who has sought help and answers at Options for Women and been disappointed. The staff, and Marie, has no room in their mission to let any woman feel judged, mistreated or overlooked no matter her storm or her situation. 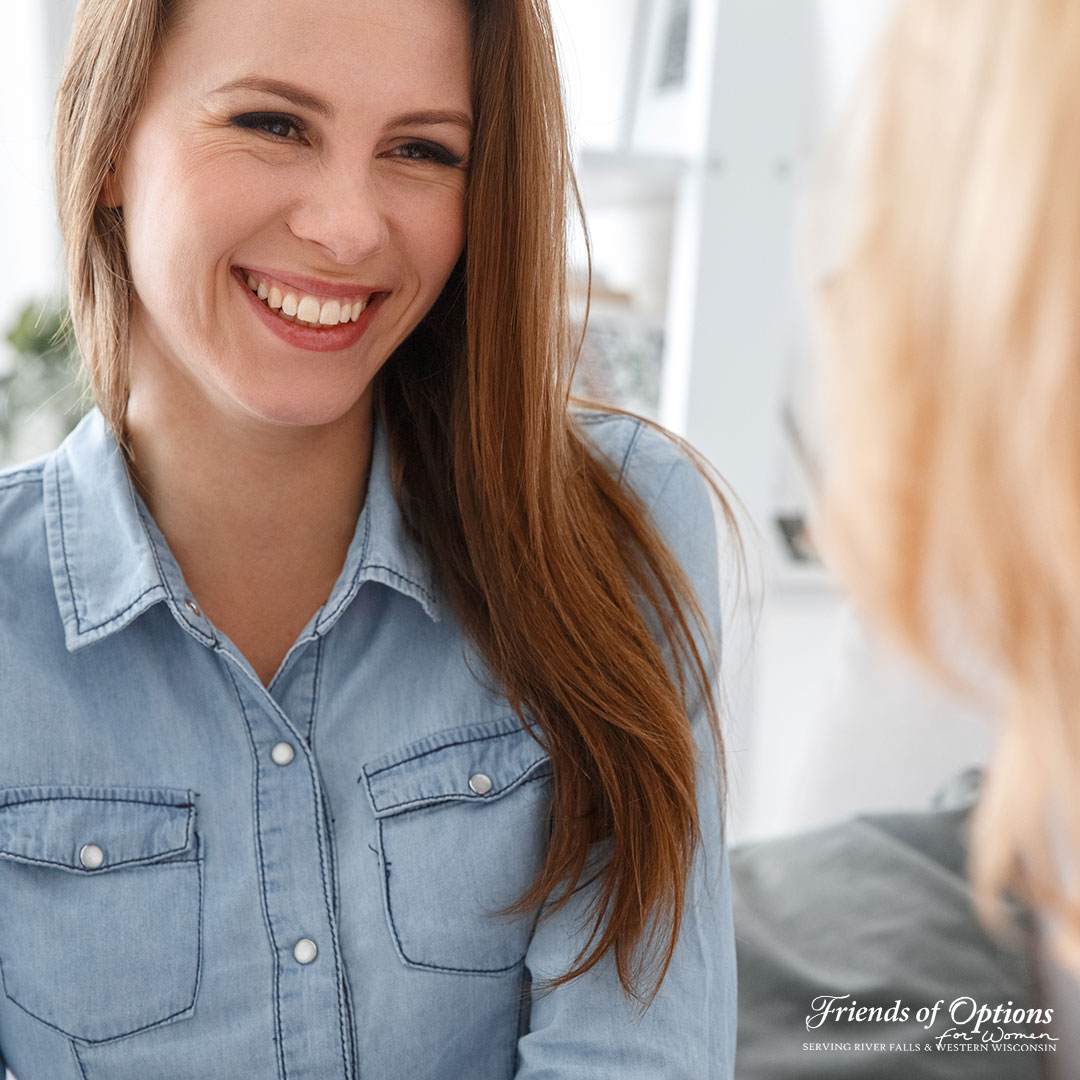